I ain't saying you treated me unkind. You could've done better but I don't mind. You just sorta wasted my precious time. 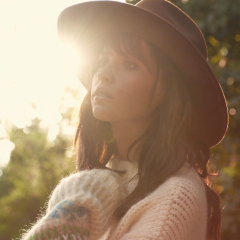 DISLIKES Waking up to an alarm, humidity, sudden loud noises, hangovers, men who flirt by insult, last call, crowded trains, airports, people who use their cell phones at the register, wet willies, earnest expressions of affection, strong scents too early in the morning, doing the dishes, realizing she has no snacks when she's already taken off her pants.